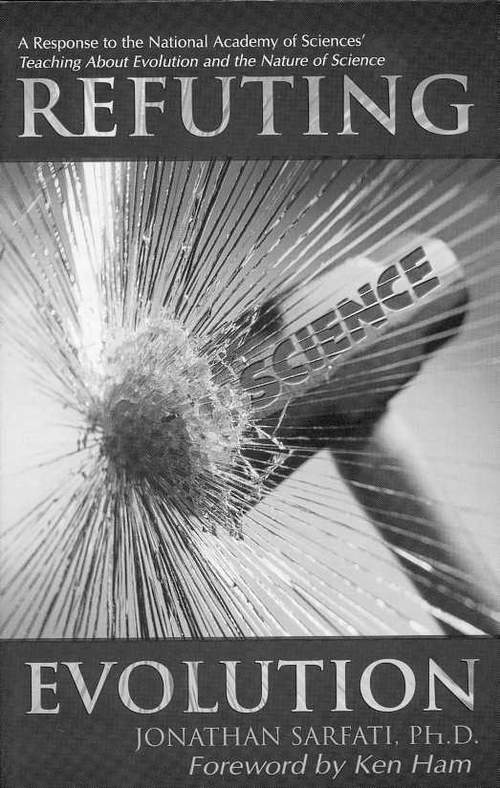 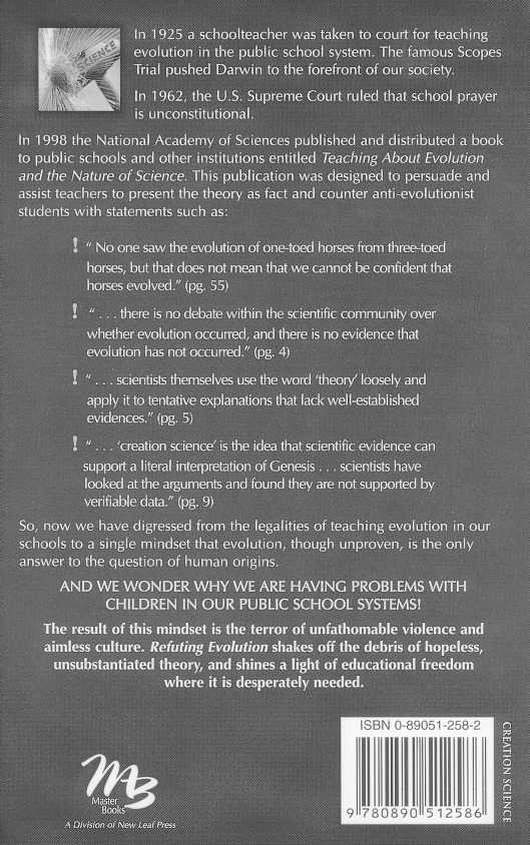 I vividly recall a seminar where a young lady, who appeared quite distressed, came up and blurted out "I’m angry."

"At me?" I replied, wondering what sort of tense situation was going to occur now.

"No, not at you--at my teachers and college professors."

This lady went on to say something like this: "Why didn’t they tell me about all this evidence that contradicts evolution? How come they taught me ideas that were discarded, even by evolutionists, yeas ago? Why didn’t they let me consider the evidence put forward by creationists? The way I conduct my life is very dependent on my beliefs about origins. Why haven’t I been allowed to hear all this information--isn’t that what education is all about?"

I must admit that when I was a teacher in the public school system in Australia, I was frustrated by the fact that many of the text books contained evolutionary teaching that had been discarded years ago by evolutionists themselves. It was also disheartening to find that most teachers seemed to just regurgitate to the students what they had been taught at school and college, and yet many of these ideas were outdated and no longer held by leading scientists.

As I talked with these teachers about this situation, I found most had not had the opportunity to read any of the latest findings. There was no system in place to update teachers on the latest research. Also, probably because of economics, textbooks seemed to take years to catch up with current theories.

As a result of this sad state of affairs, generations of students continue to be indoctrinated in outdated evolutionary theories, not even understanding that such teachings are continually modified and discarded in the real world. Thus, students and teachers alike are indoctrinated to believe evolution is fact, when in reality it is a belief system based on ever-changing concepts.

In recent times in the USA, the prestigious National Academy of Sciences made available to public schools and other institutions a book that supposedly presents the latest information on evolution. This publication is presented very professionally and certainly looks as if it might contain irrefutable evidence for evolution. It is designed to persuade and assist teachers to further indoctrinate their students in favor of evolution, with specific advice on countering anti-evolutionist students.

A creationist scientist, Dr. Jonathan Sarfati, thoroughly investigated the claims of this book. Not only were some of these typically outdated and discarded ideas still presented as fact, but at the very least one could say that some of the information was very misleading. There is also a very subtle attack throughout the book on those who hold to the Christian faith.

A highly qualified scientist, the author also has a formidable and unusually wide-range grasp of many other fields of knowledge.

I challenge professors, teachers, and students to not only read this book and consider the claims Dr. Sarfati has made, but to check out the documentation for themselves. If they do this, I believe they too may become "angry" at the way information is being presented to the public in such a lopsided manner.

In my opinion, this new publication is one of the most up-to-date critiques of modern evolutionary theory, one that has been so well researched and documented it will challenge the most ardent evolutionist.

Please consider all the information carefully--after all, what you believe about where you came from affects your whole world view. This is an important topic indeed.

The National Academy of Sciences (NAS) has recently published an educator’s guidebook entitled Teaching about Evolution and the Nature of Science. It has been made available to educators throughout America to encourage teachers to incorporate more evolution in their classes and basically teach particles-to- people evolution as fact. The guidebook states its purpose in the preface:

"Many students receive little or no exposure to the most important concept in modern biology, a concept essential to understanding key aspects of living things--biological evolution."

However, it’s hard to believe that "many students receive little or no exposure" to evolution. The whole secular education system in America (and most other countries around the world) is underpinned by evolution. After reviewing a number of biology textbooks in the secular school system, we find they are all blatantly pro-evolution. It’s also hard to believe that evolution is an "essential concept" in biology, because most "key aspects of living things" were discovered by creationists.

For example, Louis Pasteur discovered that many diseases were caused by germs and showed that life comes from life, Gregor Mendel discovered genetics , and Carolus Linnaeus developed the modern classification system, to name but a few creationist pioneers of modern biology. Also, many highly qualified biological scientists of the present day do not accept evolution--their work is not affected in the slightest by whether or not fish really turn into philosophers.

Refuting Evolution seeks to redress the lopsided pro-evolutionary way in which origins are taught. The NAS guidebook, which is compiled by many leading evolutionists, obviously contains the most up-to-date and major arguments for evolution. Thus, this critique of it addresses current evolutionary theory as taught in colleges, public schools, and as broadcast by the media. Refuting Evolution responds to many of the arguments in Teaching about Evolution and the Nature of Science so that a general critique of evolution can be made available to challenge educators, students, and parents. At the same time, Refuting Evolution gives as much positive information as space permits to defend the creationist position. Thus, it provides a good summary of the arguments against evolution and for creation. It should stimulate much discussion and help students and teacher to think more critically about origins.

Jonathan D. Sarfati, Ph.D., F.M., was born in Ararat, Australia in 1964. He moved to New Zealand as a child, where he later studied mathematics, geology, physics, and chemistry at Victoria University in Wellington. He obtained honors level in physical and inorganic chemistry, as well as in condensed matter physics and nuclear physics.

He received his Ph.D. in physical chemistry from the same institution in 1995 on the topic of spectroscopy, especially vibrational. He has co-authored various technical papers on such things as high temperature superconductors and sulfur and selenium-containing ring and cage molecules.

As well as being very interested in formal logic and philosophy, Dr. Sarfati is a keen chess player. He represented New Zealand in three Chess Olympiads and is a former New Zealand national chess champion. In 1988, F.I.D.E., the International Chess Federation, awarded him the title of F.I.D.E. Master (F.M.).

A Christian since 1984, he was for some years on the editorial committee of Apologia, the journal of the Wellington Christian Apologetics Society, of which he was a co-founder.

Dr. Sarfati currently works full-time for Answers In Genesis in Brisbane, Australia, a non-profit ministry, as a research scientist and editorial consultant for Creation ex nihilo family magazine and the associated Technical Journal, and has written many articles for both. He also contributes to the Answers In Genesis Internet website, particularly the ‘Hot Topics’ section.

What are people saying about Dr. Sarfati's book? ==> Amazon.com 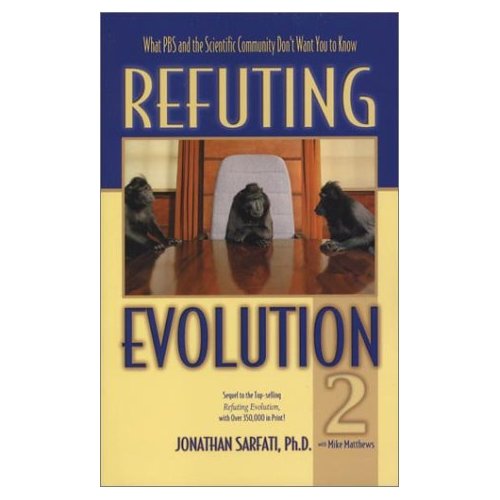 Introduction, Foreward, About the Aurthor, front cover and back cover images of Refuting Evolution are Copyright © 1999 by Master Books, a division of New Leaf Publishing Group.  Used on CEANet with permission.